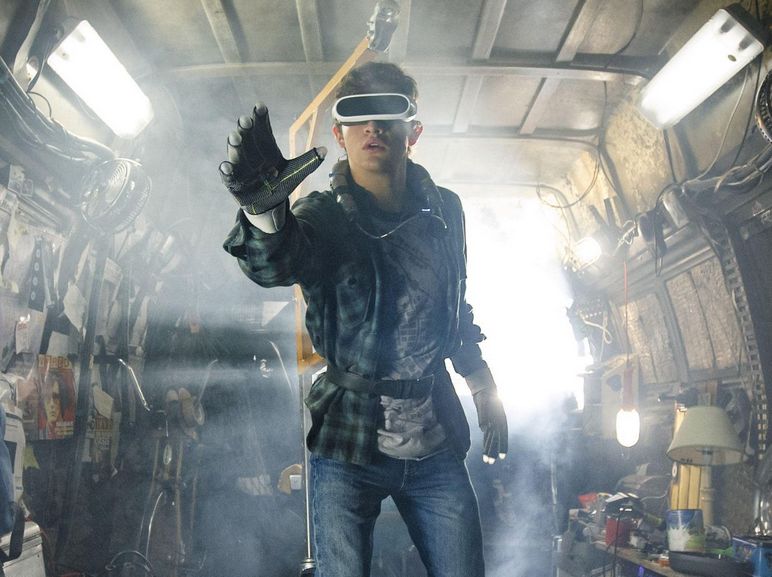 I’d like to warn the reader that I may reveal certain plot-lines and give away accidental spoilers but I will try to contain the geeky over-explaining-me on a leash as I want to just light up a flame that might make you want to see the film or better yet to read the book. Okay, enough of the introductory, let us delve into the world of Ready Player One shall we?

Synopsis
Ready Player One is a dystopian/sci-fi flick set in 2045 about a world in a state of apocalyptic decay. Due to food shortages and the current depleting availability of fossil fuels most of the population finds themselves in poverty.

Our main protagonist Wade Watts, which sounds like the secret identity of a super-hero, finds himself in Columbus, Ohio where he resides in the “Stacks” which is a ghetto of stacked houses.
The world as we know it has been in a state of turmoil riddled with crime, poverty and addiction.
Addiction to what you might ask? Video games my dude, but not just any video-game.

In Ready Player One, most people on earth by this time are “living” in this Virtual Reality game called the OASIS. At face-value, the OASIS is a gamer’s Utopian dream come to reality. It has everything that anybody from the gaming community could possibly want, with its open world Role-Play setting combined with many other game genres at your disposal, you can look how you want to look and play whatever you want.

There is also an abundance of 80’s pop-culture references as the creator of the OASIS James Halliday grew up in that era.
There was also a lot of 80’s bangers playing throughout the movie, which was a divine treat on itself. I mean they played George Michael in there so, I was pretty much in awe of this movie already by that time in the flick.

After we got acquainted with the leading character and his best friend “Aech” , we are introduced to the bad guys or should I say Company.
IOI (AYE-OH-AYE) is a company ran by the white version of Ajit Pai, Mr. Nolan Sorrento. It must be hard when your last name is a car model.
They are corporate sleaze-bags that have an army of players called “Sixers” as none of them utilize a username but a 6 number combination instead.

Anyway, IOI is basically Electronic Arts if they ever got too big and if there ever was an OASIS in the real world, can you imagine the micro-transactions taking place in the future? Thanks for the heads up Ready Player One.

All of these parties are in search of a digital Easter-egg (An Easter-egg is a hidden piece of work or message that developers leave in a game.) that James Halliday left behind. Finding this Easter-egg will award you Halliday’s immense fortune and control over the OASIS.
As you can probably imagine, the story is a classic case of David and Goliath. IOI wants to acquire the OASIS for reasons of profit and power, while our heroes want it for the sake of the community.

Gamer-Culture criticism and Social “Issues”
The movie depicts gamer-culture quite well. I wouldn’t say perfect, as they left out a lot of toxicity that comes with the gaming community. The occasional exchange of racist insults and the unapologetic banter that comes with the perks of anonymity is big factor as to why people think gamers are Nazis. The fact of the matter is that most gamers say things they would not dream of saying in real-life, because they’d get smacked by Chad and Tyrone who do not take too kindly to that kind of talk.

I read an article written by some loser named Alfie Brown of The Guardian that stated that Ready Player One “portrays video gamers at their worst”.

The writer continued:
“it’s fraught with gender problems, reverence for elitism, and a right-wing endorsement of the importance of culture over political and economic conditions. As such, the celebrated director is showing the worst side of gamer culture.”

I can tell that he never gets invited to party-chats and probably sports a man-bun or some other nu-male trend. Or he might be handsome and he’s just virtue-signaling… like most hypocrites nowadays.

Link in the meme for the complete article.

First of all, why must you bring politics into this?
You have to be pretty boring to be thinking that kind of stuff while watching a sci-fi movie or any movie in general. It’s not as if they put Ben Shapiro front and center for us to gaze out while he expounds his ideologies on us all.

Don’t get me wrong, there are some undertones of Anti-Establishment philosophies in the story of Ready Player One, which is in my opinion a pretty normal storyline.
If a big organization like IOI wants to seize control and force its agenda upon us without giving us another option, as it infringes on our way of life and is a very BAD thing… get it together Alfie.
Also, Ready Player One has a multi-ethnic cast, has a woman in probably the funniest role of the movie in my opinion and they have actually covered up the toxicity of gaming-culture to appeal to a mass audience.

The bigger picture
Politics aside, people have also criticized the movie for not being as dark and heavy-hitting as the book. Where the movie is a tad more light-hearted and even more playful at times, I understand as to why Steven Spielberg and the writers would do that, as they want kids to be a part of it.

Given the gargantuan success of “Fortnite”, the gamers of Generation Z are amongst the most lucrative of customers. Having a little brother myself who is an avid gamer and became everything I wanted him to be as a gamer, this story and movie was tailor-made for the people like him and me.

Lastly, I think this particular story that Ready Player One brings forward is one that makes all of the “out-of-place” children of the world rejoice.
Watching the movie was a treat for the eyes. Picking out the references of all the video games I played myself was in itself quite nostalgic as well. I loved this movie and sure do hope that you will too!

Go to listen to some Hall and Oates now or something.

History of Tattoos and Tattoo Evolution Through Decades