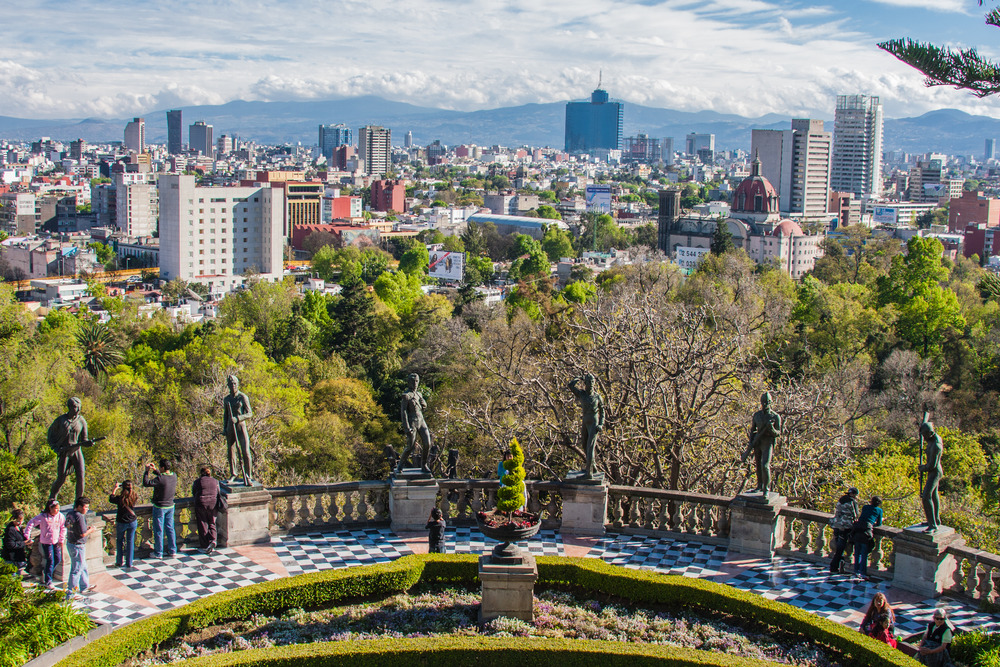 It might have been built on top of  dry lake in a highly seismic area. Yes, it might be next to an active volcano. And yes, media outlets might often report on whether it’s overall safe or not … but Mexico City is still an economic, cultural, and culinary hub. So, is Mexico City safe? Let’s talk about it from the perspective of a local.

Mexico City is Mexico’s capital. According to the Mexican government’s last official figures, its population is 8.9 people. If we take into account its whole metropolitan area, the population goes up to around 21 million people. The city itself is located in a valley at an altitude of 2,240 meters above sea level.

Researchers believe that a tribe named the “Aztecst” funded Mexico City under the name “Tenochtitlan” in the 1300s. The city was initially built over a lake. There, the Aztecs developed a hydraulic infrastructure with dams, canals, and the so-called “chinampas” (i.e. a type of floating gardens that provided early inhabitants with food). They also managed to control the lake’s water levels to gain land; all while having a careful co-existence with the lake. When the Spanish arrived and started colonizing in the 1500s, they carried out a series of efforts to reduce water levels in the lake. It completely dried up by the 18th century. After colonization, Mexico City suffered a series of changes including the construction of buildings that served as political, religious, and economic houses.

Today Mexico City is probably Mexico’s most cosmopolitan and liberal thinking city. It is one of the few places in the country to allow abortion, some forms of euthanasia, and same-sex marriage. At the same time, it houses over 150 museums, the country’s Stock Exchange, hundreds of multinational companies offices, a park larger than New York City’s Central Park, along with hundreds of culinary, and touristic attractions.

Where to stay safe in Mexico City?

Going back to the initial question… Is Mexico City safe? Well, it probably depends on the place you’re at. The city is divided in 16 municipalities (formerly boroughs). At the same time, the municipalities are divided into over 200 “colonias” (neighborhoods). Some neighborhoods are safer than others.

The modern and more wealthy areas of the city are usually safer. For instance, neighborhoods including Roma, Condesa, Juárez, and Polanco are full with restaurants and bars. They are safe to visit during daytime and nighttime. Other areas are a bit more tricky. For instance, if we talk about the “Centro Histórico” (i.e. Historical Center), there’s areas that are very tourist-friendly during the daytime, but that is probably better not to visit at night. Furthermore, wandering around Centro Histórico can easily lead to ending up in neighborhoods such as La Merced, which are better to avoid. There are also areas that are an absolute no-no. These include Tepito, La Colonia Doctores, Iztapalapa, and the bordering municipalities of Naucalpan and Ciudad Neza (which are both in the neighboring State of Mexico).

How to stay safe in Mexico City?

Mexico City has similar crime leves to those in American cities such as Chicago, Detroit, and New Orleans. Furthermore, the U.S. Department of State has no restrictions on their employees traveling to the city. They, however, do recommend to “Exercise Increased Caution”. At the end of the day, Mexico City is a megapolis. It’s good to exercise the level of cautious you’d exercise in any other big city. Here’s some risks tourists might encounter and my advice (again, as a local) on how to tackle them.

Is Theft an Issue?

Theft and pickpocketing are common issues in Mexico City. This means having your personal items as close to your body as possible is the best bet. Cross-body bags with zippers are a good option (and, as a local, whenever I go to places with big crowds, like festivals or the underground, I tend to tie a jacket around the bag as well… just in case).

It is also imperative to be careful with your cash. It’s probably better not to carry around all the cash you have for the trip with you every single day and to keep the cash you’re carrying in different locations (e.g. your bag and front pocket). When it comes to ATMs, it’s safer to use those inside malls and shops and to try to always withdraw money during daytime and be discrete while doing so. Lastly, it’s better not to walk around with expensive jewelry or watches (i.e. don’t flash the bling) and to keep any electronics inside your bag. If for some reason you end up getting robbed at gunpoint, it’s better to let the robber take the things they want. It might be frustrating, but it’s not worth risking your personal safety for any objects.

What About Petty Scams?

Just as other touristic destinations, Mexico City is not exempt of street scams. Some common ones include a person approaching you and saying they had some sort of issue and asking to make a call with your phone… right before running away with it. Others have to do with fake tickets outside entertainment events and fake bills. It’s always good to buy any sort of ticket from a reputable source and check your change. Lastly, always stay way from people doing “magic tricks” or asking you to sign petitions.

Are Water and Food Safe for Consumption?

Even though traditional Mexican cuisine is an Intangible Heritage of Humanity by UNESCO, and Mexico City offers hundreds of reputable places to eat, it’s always good to take some safety measures. First and foremost, please don’t drink water straight from the tap. Even though the city does use purifying water plants, water still travels through old pipelines that may contain metals and bacteria. Either filtered or bottled water are the safest options. If you’re staying at an AirBnB, for instance, you could get a 20-liter reusable bottle to drink throughout your stay. Well-stablished restaurants do serve clean, drinkable water, so that shouldn’t be a concern. Water and ice offered in street stalls, on the other hand should better be avoided.

Food poisoning might also be an issue and could happen even at well stablished restaurants (as in any other city). When it comes to streets stalls, it’s probably wise to always go to those with large amounts of locals eating. If the place is popular, the food is probably good quality (and affordable). As a tip, take a look at the way food is cooked anyway.

Lastly, when it comes to alcoholic drinks, always watch what was put in your cup. If you’ve ordered anything bottled, make sure the bar tender or waiter opened it right in front or your eyes.

How to get around? What’s the safest transportation?

I’ll go straight to the point here. Getting around Mexico City can be chaotic. “Chilangos” (the nickname Mexico City residents have) are reckless when it comes to driving. Traffic is insane and public transport is heavily crowded and not always that safe, so watch out. If you decide to drive, be highly cautious, specially at crossings, intersections, and red lights. Also try to keep the car’s windows shut and doors locked, since robberies might indeed happen in certain areas.

If you decide to use public transportation, I’d recommend the underground at non-rush hours since it’s the fastest and cheapest way of moving around the city. Be aware though, that during rush hours it is highly crowded and pickpocketing is common. If you’re a female, you can benefit from the “Women Only” carriage. There is also a bus rapid transit system with 7 routes and a huge number of buses and minivans around the city. I wouldn’t recommend any of these though, due to the high number of both, pickpocketing and armed robberies in these means of transportation.

Another option to move around the city are taxis and private cars. If you decide to take a taxi, make sure it is from an official taxi base and that it is white and pink and has the letters “CDMX” printed on it. Try not to stop taxis in the street and either phone or walk to a taxi base instead.

There’s a phenomenon called “Express Kidnappings” .which consists on (usually fake) taxis temporarily abducting the passenger and forcing them to withdraw money from an ATM. The chances of experiencing an express kidnapping is slim, but still present and another danger of taxis is the driver trying to charge the passenger more than they should. This kind of incidents can be avoided by using Ubers, Cabifys, or another service named “Didi”, which are all very affordable in Mexico City if you compare them to prices in some American or European cities.

Should You Worry About Natural Disasters and the Environment?

Devastating earthquakes have hit Mexico City in the last 100 years. The most recent one being on September 19th, 2017. Mexico City is in constant danger of suffering another earthquake, but so is, for instance California. If you’d like to have more peace of mind while visiting, you can always download an app such as SkyAlert, which sends out a warning before the earthquake hits, giving you time to react. The city also has a system of speakers connected to the National Seismological System. These speakers also alert people before quakes. It’s also good to know the safest areas inside a building and emergency exits, again, just in case.

Other general tips to remain safe in Mexico City include trying to learn a bit of Spanish to make it easier to move around, trying to blend in as much as possible, carrying around copies of any important documents (i.e. passport) with you. Which, in my opinion, are tips you should follow regardless of where you travel.

If you want to read more about culture, go here!