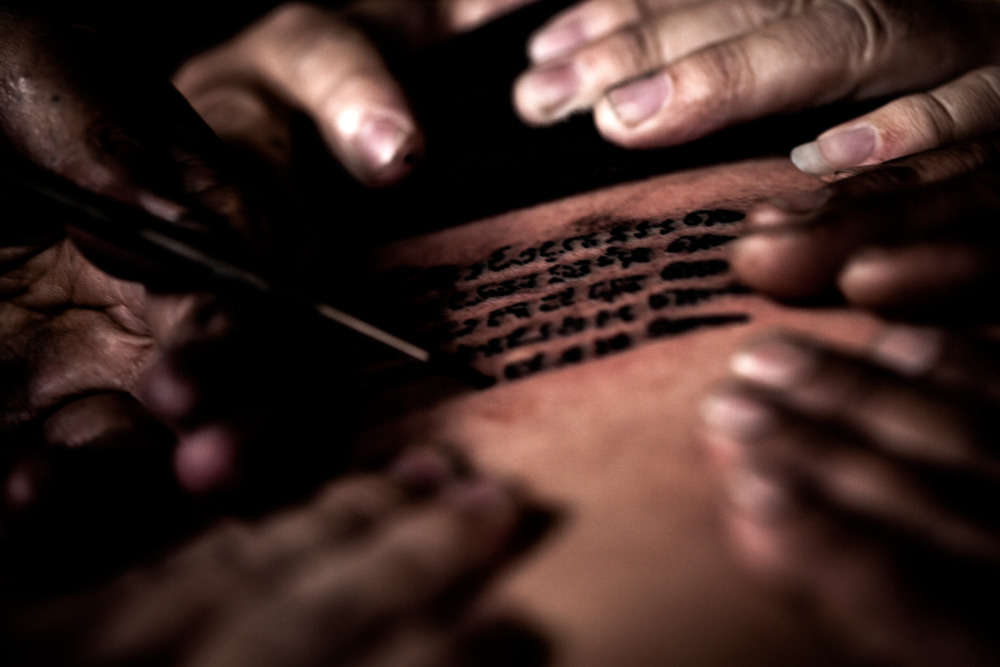 As explored in these series, tattoos have been around for centuries. They have hold different meanings in different cultures throughout time. From marks to define a person’s social status, to beauty enhancements, tattoos have undoubtedly been an integral part of societies all over the world. Thanks to rare preserved mummies, art and ancient artifacts, archeologists have been able to study ancient tattoos in flesh. This article explores ancient tattoos in cultures in North and South America, Africa, Europe, Asia, and Oceania.

The US and Canada

The tradition of tattooing in North America spreads all over the continent. Traces of ancient tattoos can be found all the way from southern Quebec in Canada, and Kansas, Michigan, and Oklahoma in the US, where the Huron People settled, to the south of Mexico, with the Mayan culture. Tattooing dates from way before any European colonizers arrived in the continent.

Tattoos amongst the Huron People from Canada and the US were seen as strange and surprising by European settlers. According to the diaries of Gabriel Sagard-Theodat, one of the first French Missionaries in what now is Canada, the Hurons would take the bones of birds and fish and use them as razors to mark their bodies by making little punctures on their skin. The person receiving the tattoo would not make any sounds or movements while being tattooed, which showed courage. After being punctured, the Hurons would pour a black pigment into the wounds to engrave them.

Tattooing was a vital practice for Native Americans in the United States. Tattoos in the country played an important role when sharing religious ideals. In the case of warriors, facial tattoos worked as traps to catch the should of the enemies they killed in battle, which they believed helped them extend their lives. Evidence of ancient tattoos amongst Native Americans comes mostly from ceramic vessels. These pieces were shaped as human heads and used to be decorated with motifs that included birds, feathers, and claws, which related to a deity called the “Birdman”. This figure symbolized life over death and tattoos related to it granted warriors the force of the deity.

If we go further to the South, in Mexico, tattoos were important in both the Western states of Jalisco, Colima, and Nayarit, and the vey south of the country, where the Mayans settled. In the case of Western states, evidence of ancient tattoos comes from artifacts recovered from tombs. These artifacts were mainly ceramic figurines with marks depicting tattoos. Some scholars believe these figures could represent different deities, while others believe they could be representations of the people with whom they were buried. The designs of the tattoos most likely communicated social status and the figures were probably for ceremonial practices.

In the case of the Mayan culture, body modification was done in order to please the Gods. The more body modifications an individual had, the higher the social status of the person. Both, men and women had tattoos. Women usually had delicate designs on their upper body, while men got marks on their arms, legs, back, and face. Tattoos were painful and dangerous in the Mayan society. Tattooists used to draw the desired design on the recipients body and would then cut the skin. The scar resulting created the tattoo. It was common for Mayan people to die from infection, and those who survived were seen as brave and honorable. Mayan tattoos included animals and religious myths and symbols honoring the Gods. As in other cultures, tattoos were a symbol of social status in the Mayan culture.

Just as in North America, ancient cultures that practiced tattooing were scattered in different countries around South America. These countries, among others included Peru and Chile.

In the case of Peru evidence of ancient tattoos has been found on both artifacts and human remains. A specific Peruvian culture, the Moches, used to heavily and elaborately decorate ceramics, gold pieces, and textiles. Some scholars believed the markings on gold ornaments including masks could actually represent tattoos. Tattoos in the Moche culture could have represented identity, death, and rebirth. Tattoos in the region have been found not only on artifacts, but also mummies. An example of this is the “Lady of Cao”, a preserved mummy found in an archeological zone called El Brujo, in the Northern coast of Peru in 2005. The tattoos on her body represented different animals including spiders, crabs, and snakes. It is speculated that these motifs related to sacrifice, death, and fertility.

Another example of tattooed mummies in South America are the Chiribaya mummies, found in both Peru and Chile in the 1990s. One of these mummies had tattoos depicting animals, and a series of circular shapes on her neck. The later was done with burned plant materials and probably served as some sort of protective or healing function.

Another tattooed mummy, called the “Chinchorro man” was found in Northern Chile. This mummy has a series of black dots on his upper lip, which looks like a thin mustache. These marks probably indicated social status or allegiance.

Hints of ancient tattoos in Africa point to cultures in Egypt and Sudan. In the case of Egypt, several tattooed mummies have been found. These mummies are thought to be related to Hathor, the Goddess of love, happiness, dance, and musical arts in the Egyptian culture. One of these is the mummy of Amunet, a priestess. The mummy’s body has tattoos that cover the lower abdomen, torso, the space beneath Amunet’s right breast, the inside of her elbow joints, left shoulder, and thighs. The tattoos represent eyes, snakes, lotus blossoms, and cows, which hugely differ from earlier tattoos in the Egyptian culture. When these mummies were discovered, researchers thought tattooed women were either prostitutes or concubines due to the perceived seductive nature and locations of their tattoos. Nevertheless, it is now believed the tattoos actually represented the mummies’ connection to Hathor. It is also likely that tattoos were seen as an element of women’s sexuality.

In the case of Sudan, archaeologists found a female mummy with a tattoo on her inner thigh in 2014. The tattoo spells the word “Michael” in Greek. This tattoo probably has to do with St. Michael, the Archangel. Similar symbols have been found on stone tablets and church mosaics, but never on human flesh. Some researchers believe the woman was part of a Christian community and got the tattoo either for protection against sexual violation or to help her conceive. Archaeologists still don’t know if the tattoo was meant to be seen by others.

Like in other regions, ancient tattoos in Southern Europe have been found on both human flesh and old artifacts in countries such as Italy and Greece. In Italy, the body of an ancient man nicknamed Ötzi the Iceman was found by two German alpinists in 1991. Ötzi died while climbing the alps thousands of years ago and due to the fact that his body was covered in snow, it was almost perfectly preserved. The body is covered with over 50 tattoos that form lines and crosses. These tattoos were made by a series of incisions on which charcoal was then rubbed. The marks are present on Ötzi’s ankles, wrists, knees, and back. Researchers believe the tattoos were some form of acupuncture, thus making them therapeutic rather than cosmetic or religious.

In the case of Greece, tattoos were common amongst a tribe named the Thracians (who were located in other European areas as well). Thracians saw tattoos as symbols of pride. Tattooing was highly admired and seen as a mark of “noble birth” and there are ancient Greek vases depicting tattooed Thracians.

Ancient tattoos in Eastern Europe include those done in Poland, Romania, and Russia, among others. In more recent times, the 1800s, Polish authorities used to cut tattoos out of dead convicts. They would then catalog them in an attempt to identify gang affiliations. Inmates in Polish prisons used to get tattoos using different instruments that included broken glass and razor blades. After piercing their skin with these instruments, they mixed substances such as charcoals, pencil lead or cork with water, soap and fat and rubbed them on their wounds. Their tattoos represented their professions, religion, and background.

Mummies with much more ancient tattoos than the ones mentioned above were found in Siberia in 1993. These mummies belonged to the Pazyryk tribesmen, a nomadic tribe that used tattoos as means of identification, and according to some researchers as some form of mystical protection. One of the mummies, who was probably the leader of the group, had tattoos that depicted strange beasts. One of these was a monster that had a panther’s tail, an eagle’s beak, and the body of a goat. Along with other monsters and regular animals, the man had some circular tattoos on the neck. These could have had a therapeutic purpose.

Another mummy, nicknamed the “Princess of Ukok” was also found in Russia. The princess’ tattoos were very intricate and highly detailed, and just as with the Pazyryk tribesmen, depicted strange creatures. Researchers believe the woman had a high status because she was buried with several saddled horses and had fine clothing.

In the case of Romania, over 20 ceramic figurines where found in northeastern Romania in 1981. These figurines were made by the Cucuteni culture, which settled in what now is Romania and Ukraine. The figurines had lines drawn on them, which researchers believe could represent tattoos.

In the case of Asia, ancient tattoos have been observed in Chinese, Philippine, and Japanese cultures. Mummies in caves in Kabayan, Philippines, survived a fire and were recovered by archaeologists. Several of these mummies are covered with tattoos depicting both, geometric shapes and omen animals (e.g. lizards, snakes, scorpions, centipedes). When they were alive, these ancient people won the right of getting tattooed after winning a battle.

In Japan, an indigenous group named the Jōmon people, created several humanoid figurines with engraving on their bodies and faces. These marks most likely represent tattoos. The Jōmon people probably using obsidian artifacts as tattooing tools.

Lastly, tattooed mummies have also been found in Tarim Basin, in southern China. One of these mummies belonged to a woman who was probably sacrificed and buried. She has charcoal tattoos depicting moons on her eyelids, ovals on her face, and some other decorative patterns. Her tattoos were more likely symbolic or cosmetic. Her tattoos were done through a puncture technique similar to the one used by Thracians and the Pazyryk people. Another male mummy found in the region had suns tattooed, which probably represented a male God.

And, lastly, Ancient Tattoos in Oceania

Lastly, in the case of Oceania, tattoos were common in countries that include New Zealand and the Solomon Islands. The Maori tribe of New Zealand used to preserve tattooed human heads in a practice called “mokomokai”. To do this, the Maori  filled severed heads with fiber and gum. They then boiled and put the heads over fire. They lastly dried them in the Sun. These heads (commonly only male) were covered in ancient Maori tattoos. These tattoos were made after carving the skin and filling the wounds with ink. Since they were extremely painful, they were seen as a sign of courage.

In the Solomon Islands, local tribes used obsidian artifacts as tattooing tools. These artifacts also were found to contain charcoal, blood and fat, which were all used as pigments. In addition to this, tribes in the islands would sometimes also place ink on the skin and then cut it to help it penetrate the skin; use thorns or fish spines to puncture the skin; or use quartz and bamboo to make incisions.

More information regarding tattoos in Oceania and Asia can be found in this article about Polynesian tattoos.

As impressive as it may seem, cultures in different countries, and sometimes even continents, used similar techniques to tattoo. The practice would sometimes have similar meanings as well. Even more interestingly, tattooing has survived ancient times and prevailed until today.