Rick and Morty have been entertaining their fans ever since December 2013. Currently, there are three seasons of the American animated sitcom. They follow the crazy scientist Rick and his grandson Morty on adventures through all galaxies. A short film parody of Back to The Future inspired the series. Roiland created it for the short-film festival, co-founded by Harmon, called Channel101. After Adult Swim asked Harmon for a new TV show idea, he came together with Roiland. Shortly after, the idea for Rick and Morty was born. Although some people say that it seems like a combination of The Simpsons and Futurama, many praise the series Rick and Morty for its originality and creativity. The fans love the show for its absurdity and of course the unique characters. After the sitcom’s final episode of season three, even a famous billionaire shared his love for Rick and Morty on Twitter.

If you haven’t heard of the guy that is trying to get human life on to mars while developing technologies that integrate human brains with artificial intelligence, teaching cars how to drive themselves and on top of that finds time to enjoy a good laugh watching Rick and Morty, it’s about time!

Who Is Elon Musk?

Elon Musk was born in 1971 in the South African Capital, Pretoria. At the young age of twelve, he taught himself computer programming and went to Canada with 17 to attend University. After receiving a physics, as well as economics degree, he decided to start his PhD in applied physics and material sciences. Not even one month into it, he dropped out to follow his entrepreneurial visions. From 1995 until the present, he has been founding, co-founding and managing various projects and companies. To give you an idea about his achievements of the past years, here is a compact summary.

Elon Musk’s Life in a Nutshell

1995 – Zip2, is a software company founded by Elon and Kimbal Musk. It gave advertisers and consumers the opportunity to communicate with each other.

1999 – x.com and PayPal were introduced to the market, offering financial services and e-mail payments.

2002 – SpaceX was brought to life. It is a project with the goal to make space transportation more affordable. Elon Musk’s greater vision, however, is to make human life possible on different planets. (Currently, Elon Musk’s Roadster is up in space, has passed Mars and his heading towards Jupiter.)

2006 – Elon Musk took over a position at Tesla, a company that strives to create an entire sustainable energy ecosystems.  He is currently the CEO and also works as product architect.

2006 – Solar City, is a subsidiary of Tesla with a focus on solar power systems.

2013 – Hyperloop is a concept for high-speed transportation systems by SpaceX.

2015 – OpenAI is a non-profit AI research company. Their mission is to build safe artificial general intelligence (AGI) and spread the benefits as widely as possible.

2016 – Neuralink’s  was founded by Elon Musk and eight others. The team is trying to connect humans and computers by developing implantable brain-computer interfaces.

2016 – The Boring Company was introduced on Twitter when Musk tweeted “Am going to build a tunnel boring machine and just start digging…”.

Rick And Morty in Musk’s Life

As you can see, it’s a pretty busy genius we’re looking at. And yet, he finds time with his kids to follow the spacey adventures of Rick and Morty. He shared on Twitter that he finds the show ‘kinda disgusting’ but him and his boys love it. Rick and Morty’s Twitter responded quickly, promising to ‘fully disgust’ the whole Musk family by the end of season three. With such a promise made, you’re probably curious of the outcome… 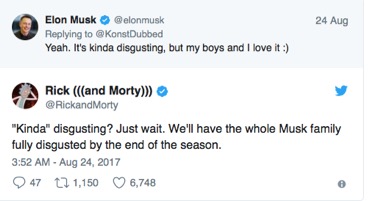 So here’s what Elon Musk had to say about the science-fiction sitcom’s final episode of season three:

The Plot of The Series

Rick went missing for a few years and suddenly turned up out of nowhere at his daughter’s (Beth’s) doorstep. Her husband Jerry worries because he thinks Rick is a sociopathic scientist that does insane things in their little garage. On top of that, he takes his grandchildren Morty and Summer on adventures across the whole universe, putting himself and them into crazy dangers.

Why You’ll love Rick and Morty

It’s about science, but you don’t have to be a scientist to get the jokes

Although each episode brings up a number of scientific theories, the extreme presentation will make anyone laugh. With the exaggerations of theory, emotions and storyline, Rick and Morty is not just for the science experts. Anyone will get the jokes.

As mentioned in the beginning, some people like to describe the series as a combination of Futurama and The Simpsons. However, take some time to see it for yourself. Rick and Morty’s fans praise the sitcom for its creativity and uniqueness.

One thing is for sure – there will not be a single episode with a boring storyline. Action and a little bit of drama will always are a guarantee.

You won’t see the end coming – always expect a twist!

With all the action, scientific craziness, a sociopathic grandpa and a not-so smart grandson, you can never predict where the story is going to end.

Grab some popcorn, watch some Rick and Morty and find out if you’ll love it as much as Elon Musk.