Home Culture The Room 2018: So bad that it is good

The Room? What’s that?
– Everyone

If you were friends with any of the hipsters or the out-of-place-people in high school around the early/late 2000’s. you might have noticed that they had an interesting yet unquestionably obscure taste in music or movies.
After they were done introducing you to the sounds of Joy Division, The Smiths, and other alternative 80’s bands. After the music the hipster clan would start with the movies, starting off slow with the likes of ‘Juno’, ‘Garden State’ or ‘the perks of being a wallflower’.
Then one fateful day or night, one of your overtly irony-loving buddies suggests to the group to watch a comedy, but no one is in the mood for a crude Adam Sandler or Kevin Hart flick so one of them excitedly blurts out: “Have you guys seen ‘The Room’?”.
After that same person expounds the lore of everything behind The Room. From it being the worst movie ever made to describing Tommy Wiseau’s acting. You all decide to watch it.

As the movie begins and the first lines of dialogue from “The Room” ring off so does the first waves of laughter.
After watching that rather god-awful yet unintentionally comedic display of cult cinema you start to develop a sort of allure for it that you cannot explain.

You were exposed to one of Hollywood’s most incoherent and critically panned cult films… And oddly enough you like it a lot. You even started to research the actors, the budget, the mad-semi-genius-but-kind-of-weird-yet-fascinating Tommy Wiseau and of course, you have been practicing the “Oh, hi Mark” line in full Wiseau accent of course.
So it begs the question, was that a magnificent piece of art or complete and utter manure?

What a story Mark!
– Johnny 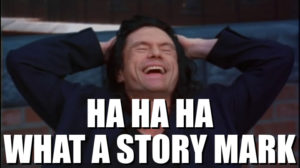 The story behind The Room is one told many times over in Hollywood, but with better acting and superior special effects. The story told by Tommy Wiseau is the basic ‘Man caught in the middle of something’ story arc. Since the story is not all too important or riveting, I’ll go ahead and spoil it for you… I mean it is not as if the story was written by Aaron Sorkin.
The story is about Johnny who is your standard issue American everyman that saves his money and is universally loved by everyone. Johnny has it all, his future wife Lisa, a good paying job as a banker and a trusty best friend named Mark.

As the story progresses, it turns out that Lisa is cheating on Johnny with his best friend Mark. After the over the top sex scenes with music that will make you want to stick two sharpened nr.2 pencils in your ears, things get kind of sad for good ol’ Johnny.

Lisa starts to spread rumors that Johnny hit her while denouncing him to her mother, who has cancer… but “That’s not really important to the story.” (As said by Tommy Wiseau himself)

The story then finds Tommy confronting Mark about the cheating and affronted him by telling him “You are not good, you are just a chicken” while flapping his arms and making chicken noises.
To wrap up the entire movie it just involves Johnny’s dramatic and yet extremely satisfying suicide…

Well wasn’t that one of the most Oscar-worthy plots you ever read?

Clearly not, but the genius comes in the way Tommy speaks and the mannerisms of the actors throughout this movie. I mean the behavior of the way that the characters acted is not the way an actual human-being would act.
To quote Tom Bissell the co-author of ‘The Disaster Artist’ (the book that reveals the events that took place during filming of The Room and is now a movie by James Franco) “It was as if this movie was written by an alien that never saw a movie before but had movies thoroughly explained to him”.  I could
not have said it better myself.

I like acting better than anything else, but, you know, directing’s good.
– Tommy Wiseau

Tommy Wiseau, he gets way more flack than he deserves sometimes. I mean so what if he looks like Dracula’s cousin? I would still love to meet him and have a non-‘The Room’-esque conversation with him.  Sometimes I wonder if he was simply playing himself in The Room.
Tommy Wiseau is known for saying some weird twaddle as my British peers would say. For starters, he once said that because of ‘The Room’ the crime rate in the U.S lowered down, on account that people were too busy watching his film. Now that’s my kind of guy.
Oh and he hates farts, with a brutal passion as he once flipped out on the set of ‘The Room’ because he suspected that someone farted in between takes. I don’t think anybody likes it when someone cuts the cheese. Yet Tommy loathes it so much that he openly requested the crew members to not do it and that it is “Disgusting and unnecessary”.

Besides the weird stuff, Tommy is a true American patriot, probably more patriotic than most Americans currently living in the United States. He has a profound love for America’s culture and pop-culture icons varying from Elvis to James Dean.

The man even took 5 minutes of silence alongside the entire cast of The Room during the one year anniversary of 9/11 and then began to chant USA over and over.
Oh, Tommy, it seems that you truly are from New Orleans.

Fans around the world still flock to theaters to catch a sold-out showing of The Room.
That sounds rather poetic considering the movie flopped on a major scale during its initial release which lasted around two weeks.
The popularity today has pretty much sky-rocketed considering that James Franco just directed and released the semi-autobiographical flick ‘The Disaster Artist’ about a month ago. The cult following derives from the fact that even though ‘The Room’ has the production value of pond scum and the writing prowess of Tyler Perry. It still manages to get an immense amount of laughs.

To categorize ‘The Room’  as a comedy wouldn’t be completely accurate as you have to be kind of mentally deficient to be able to watch those horrible sex scenes without cringing and tolerate the crappy dialogue from hell, but that’s what makes it such a sleeper hit of a movie. The fact that it makes you feel normal. Because you are reminded of the fact that you share the same breath of air as Tommy Wiseau.

All and all Tommy gave us a gift that keeps on giving and will keep on giving until future generations decide to ban The Room. In Johnny’s words: “If a lot of people loved each other the world would be a better place to live.“