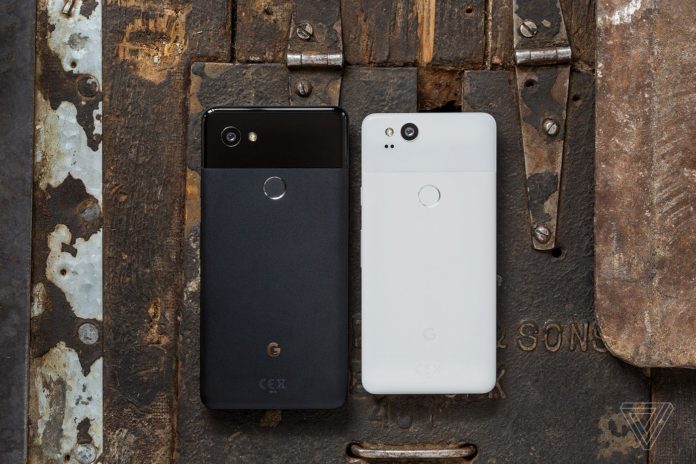 Whether you notice it or not Google is everywhere these days. From your web browser, cars, mobile phones, speakers, etc. Last year Google thought it is not enough to be in your phones but to become your phone (mind is blown). They did so by announcing and releasing the Google Pixel, a Google smartphone. Obviously, people were very excited for this but it did leave many people wanting a bit more out of the phone. If you ask me, this is just us as people really having high expectations about electronics but in the end, I do understand because these phones are getting more expensive year by year. (I want to blame Apple but don’t want to trigger the Apple sheeps). As was expected a new version of the Google Pixel was announced this year and lucky for us we got two phones to talk about. So let’s talk about the Google Pixel 2 vs Pixel 2 XL.

You can guess very easily from the names of these phones that one is bigger than the other. In other words, it’s the Apple tactic of releasing a small one for the poorish folks and a big one for the rich peeps. However, a big difference that has to be noted is that the two phones have the same specs. They are literally the same phone, just that one is bigger than the other one. It should be noted that the price difference is significant between the two phones. The Google Pixel 2 64GB version costs €800 and the Pixel 2 XL 64GB version costs €940. What we can also see is that it is reaching the Apple iPhone level of €1000 euros and as a broke ass student, this gets me really sad. If you want the Pixel XL 2 128GB version you will have to pay €1,050! By the way, these prices are coming from the German market where the prices are a bit higher. My mind is just thinking is it really worth it to spend so much money on a smartphone? What is so special and different about this phone compared to the other cheaper phones in the market? We can see the specs and I’ll let you decide on your own, I don’t have any hidden agenda here people.

What are you getting for the amount of money you are giving away?

Let’s start with the technical stuff that most people like to look over. As I mentioned in the beginning, both phones are practically the same. They both have an octa-core 2.35 GHz Qualcomm Snapdragon 735 mobile platform (what a mouthful), an Adreno 430 GPU, and 4GB of RAM. Google is also following the trend of having a phone without a micro SD slot. This is done to give the phone a more clean look, no bumps or removable back. However, to compensate this they put more onboard storage to hopefully give you enough memory space to work with (I’m very skeptical in this area). Both phones have a 64GB and a 128GB version.

You get a Pixel-exclusive google assistant (it might come to other Android devices so it’s only exclusive for the moment). The cool thing about google assistant is that it is constantly learning. The more you use it the better the assistant will be. You can at one point ask the assistant what your favorite color is and it will most probably get the right answer. By saying “Good Morning Google”, you will be shown what your day will look like. From your appointments and how long it takes you to get there, the weather and any news you are interested in will be included in your daily briefing.  In the end, it really depends on the person if they want their phone to know a lot about you or not. In my honest opinion, it could get a little creepy that a virtual assistant could have the possibility to know more about you than you do.

Another interesting feature is the Always-On Display. The Always-On option will let your phone listen to everything in your surroundings (only if you choose for this to happen). Let’s hope that the phones don’t also have the same glitch as the Google Home, listening to everything even though it was not supposed to. Why would you want to use the Always-On Display? The most useful thing that comes with this is that it will listen to songs that are playing around you and immediately search up information about it (song name, artist, release date etc.). This is great for the people, including me, that struggle to open their Shazam app on time.

The weirdest feature for me so far is that the phone is squeezable. Yup, you read that right. You can squeeze the phone. Why? It is kind of a “shortcut” to start google assistant. Just a very light squeeze and you can get to work with your assistant. Here is a video showing you what other gestures can be used on the phone instead of me giving you a list. Or in other words, I don’t feel like writing it and honestly, I think you prefer a video more than words.

Best Camera in the smartphone market?

The first Pixel phones had a great camera. As we can see competitors these days are working hard to bring a better phone camera each year. The best phone cameras in the market were the iPhone 8 and the Samsung Galaxy 8 with a DxOMark Mobile score of 94. DxOMark is a company that tests cameras and gives them a score on how well they performed. They tested the Google Pixel 2 cameras and gave them DxOMark score of 98, the highest score ever given to a mobile phone camera. The Pixel 2 has a 1/2.6-inch 12.2MP sensor and a f/1.8 aperture.

It started out as a rumor but it has become a sick reality. There are no headphone jacks in the new Pixel phones. This sucks because I’m very sure other companies are going to follow which means that at one point in our world’s history the headphone jack will cease to exist in phones (oh dear God if you are out there please let me be dead by then). How will you listen to music? By using a USB Type C wired headphone or by using Bluetooth headphones. Another option is buying an adapter dongle which was priced at €20 euros but is now at €9 euros after many people were like “wtf Google”. The most expensive option out there is to buy the new Bluetooth Google buds, the Google Pixel Buds which will cost around €180 euros. The really cool reason why these headphones are so expensive is that they can do real-time translation. Holy mother of God! Let me write that again. REAL-TIME TRANSLATION! It can do this with 40 languages. The peeps at Google had a live testing when they were announcing all the products and it was just very cool to watch. So if you have the money and you know you need this then go ahead and buy it because you can’t really find this anywhere else.

Google Pixel 2 and Pixel 2 XL are not available worldwide

Now before you go get super excited (or not) about this new phone you should check if you can even buy it in the country you are in. Just as the first Google Pixel, they will not be available worldwide. The smartphone is only offered in a few countries. Those being the U.S., (it would be very stupid if they didn’t sell it there), the U.K., and Germany. This makes it stressful for anyone that will want to buy the phone and doesn’t live in the country that it is being offered in. If this person really wants this phone then they will have to pay extra to get it to their country or just a ask a friend living in those countries to buy you one.

The Google Pixel 2 and Pixel XL, in my opinion, are really cool smartphones but there are two things that stop me from buying it and feel like Google could improve on. First, lower the price. I’m sorry Google but I will like you less if you become like Apple and overprice everything you sell. Not everyone can afford to pay so much money for a smartphone and I feel like I’m not being offered a lot for the price tag that you put. Second, make this phone available in more countries. Not only is this phone already expensive but you are also forcing people that live outside the U.S., the U.K., and Germany to pay even more money to get your phone. I know it’s your first years in the smartphone market but you can do better.

To watch the full unveiling of the Google Pixel 2 and Pixel 2 XL and other products click on this link:

What do you think? Will you get the Google Pixel or will you pass and wait for another smartphone to gain your attention? Or will you look at the reviews first and see if that is enough to convince you.